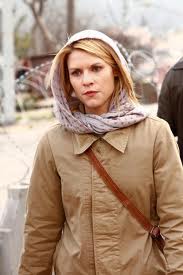 It is clear that the writers of Homeland have done their research.  Claire Danes plays Carrie who is at the same time brilliant and troubled.  Carrie is a CIA analyst trying to uncover a American POW who has been turned.  Her theories stretch the boundaries between what is considered plausible and a real reach…

Carrie has hidden her disorder from her colleagues (the viewer must suspend disbelief here…this would never go undiscovered in the actual CIA).  How many of us have had to hide our illness from our employers?  Her friend discovers her antipsychotic Clozapine and she dismisses it.  I have a mood disorder, so what?

The mood disorder only becomes a problem (there are also some substance abuse and insecurities but I won’t elaborate…) when she gets a concussion as the result of explosion due to a bomb.  She becomes manic.  It was a little unclear to me whether it was the concussion, a medication issue or both.

And we are afraid of what we don’t understand.

What happens next is a wonderful portrayal of the creative process induced by hypomania.  She has papers strewn all over.  They are all color coated.  Things are highlighted and underlined.  I have been there.  Working on my masterful plans.

Her theory actually ends up having some validity.  Problem.  She makes a phone call.  To the wrong person.  And that phone call gets her fired.  I have never gotten fired but I know the regret of having made that stupid phone call.  Or the in-person conversation.  We then witness the dark depression that follows a manic episode.

The season closes with her getting electro-shock therapy.  I would have like to have this explained a bit more (I must remember it is just a TV show—it makes for more interesting drama).  Although ECT has become much safer and humane, it is my understanding that it isn’t the first form of treatment.  We are left to assume she has tried other things.

I like how this show has presented us with a more honest portrayal of the disease.  We aren’t all psycho killers.

I haven’t seen the second season yet but I am excited to see how the show continues to portray this issue.  I am very curious to see how Carrie’s character evolves.